Format of the Master Class:

2010 Distillery of the year – Malt Advocate

2007 Irish Distiller of the year – Icons of Whiskey

Cooley Distillery is the only independent Irish whiskey distillery. Established in 1987, Cooley takes its name from the location of the distillery, situated at the foothills of the Cooley Mountains, in Co. Louth. In 2010, Cooley reactivated the Old Kilbeggan distillery in Co. Westmeath as a fully functioning distillery. Cooley has been a driver in expanding consumer choices in the Irish whiskey category and in particular has driven the development of Irish Single Malts and Grain whiskies. To learn more about Cooley Distillery visit

Media Release Wednesday 30th March, 2011 Cooley in US Gold Rush Irish distillery collects 12 Gold Medals at San Francisco World Spirits Competition This week Cooley Distillery, Ireland’s only independent whiskey distillery, continued its phenomenal strike rate on the international circuit by claiming 12 gold medals at the San Francisco World Spirits Competition. The 11th annual San Francisco World Spirits Competition brought together a panel of 33 judges from across the industry to taste and score a record number of entries, 1,106 products from 61 countries. The judges awarded Double Gold, Gold, Silver and Bronze medals to the participating brands and special awards to the most outstanding spirit in its class. Cooley won the top award, the coveted Double Gold Medal for its Connemara Cask Strength Peated Single Malt, Tyrconnell 10 Yr Old Madeira Finish Single Malt, Tyrconnell 10 Yr Old Port Finish Single Malt and topped it off with a Double Gold Medal and Best in Class for the Michael Collins 10 Yr Old Single Malt it produces for US importer Sidney Frank. In addition, Cooley collected Gold Medals for its Kilbeggan 15 Yr Old, its Tyrconnell 10 Yr Old Sherry Finish Single Malt and for two further expressions of its Connemara brand. Jack Teeling, Managing Director of Cooley Distillery, commented, “This latest success proves that Cooley is consistently producing some of the finest whiskeys in the world today. These awards will further elevate the profile of Cooley Distillery in the US which is now the largest market for Irish whiskey in the world and continues to grow by double digit figures year on year. In 2010, we doubled our sales of whiskey to the US and our recent awards will help us continue this growth in 2011.” ENDS For Additional Information Jack Teeling, Managing Director, Cooley Distillery Tel: 01 833 2833 E: [email protected]

Named after the island of Inish Turk Beg, this deluxe Single Malt whiskey was only launched in 2010 with a limited “Maiden Voyage” bottling of 2,888 bottles.  It is a double distilled Single Malt Irish whiskey, which has been first matured in American bourbon barrels, then finished in port and sherry casks, and very unusually in old poitin casks which had lain empty on Inish Turk Beg Island.  The bottle, shaped to represent the island itself, is hand blown with local sand, and the whiskey was bottled at 44% with rainwater from Inish Turk Beg.  The whiskey has gentle notes of oak and vanilla with plenty of fruitiness and spice – orange peel, ripe apples, lemon curd, ginger snaps – on the palate.

Shake the Ingredients Well Over Ice

Serve in a Long Glass with Ice

Serve in a Long Glass with Ice

Fittingly the local heritage group was in attendance to witness the launch of the new whiskey as they played a key role in ensuring the survival of the distillery during the years it lay dormant. Also in attendance were distillery employees, without whom the world’s oldest still could not have been brought back to life. All gathered at this momentous event received a signed bottle of the first batch 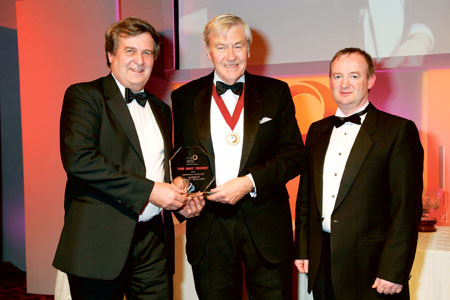 John Teeling, chairman of whiskey maker Cooley Distillery, pictured with an old still in the boardroom of his office in Clontarf, Dublin. Illinois-based Beam last week (December,2012) agreed to acquire the distillery for $95 million. Teeling is expected to make about $16.5 million from the sale.